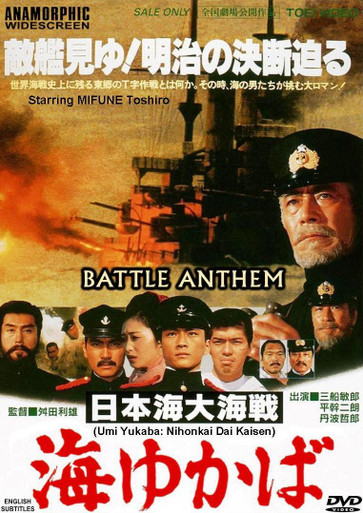 This is the story of Japan’s great victory in the Battle Of Tsushima Strait which devastated the Russian Fleet when Admiral Togo ”Crossed the T” lining up the Japanese Combined Fleet so that they could utilize all their ship’s batteries while the Russians could only use their forward guns. Leading up to the exciting sea battle, the film follows members of the crew including Genta, a trumpet player in the Marine Band whose music helps inspire Mikasa’s men to do their utmost in the battle, even after being hit by as many as 30 artillery shells from the Russian battleships. Mikasa, which was Admiral Togo’s flagship is now a museum at the Yokosuka Naval Base often shows this film in a small theater onboard. The title refers to the patriotic song ”Umi Yukaba” (If I Go Away To The Sea) was sung by the Japanese military when going off to war.