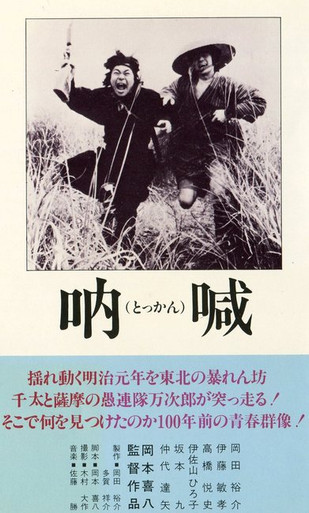 One of the rarest and least well-known works of master filmmaker Okamoto Kihachi, this amazing movie tells the story of Sentaro, a young man who joins up with a local militia called The Raven's Corps to fight the Satsuma-Choshu troops during the Boshin War.  With a brief cameo from mega-star Nakadai Tatsuya as Hijikata Toshizo of the Shinsengumi to set the stage for a brilliant mixture of violence and humor, as Sentaro looks for and finds adventure during perilous times.  The third part of Okamoto's triptych of Meiji era stories, it makes the well-known "Red Lion" seem more like the "Pink Pussycat".  His friendship with a pickpocket from Satsuma who switches sides whenever it suits his needs leads to some complications that could cost Sentaro his life as they slip behind enemy lines trying to reach Aizu territory for a last stand.


Written and Directed by:  OKAMOTO Kihachi