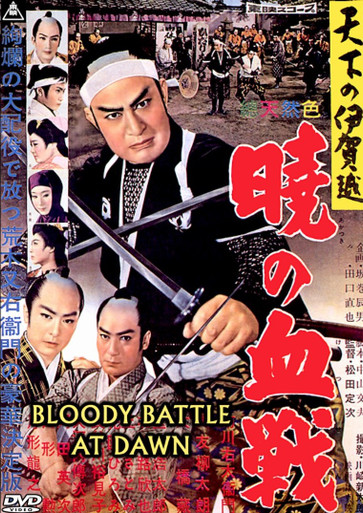 BLOODY BATTLE AT DAWN (Tenka no Igagoe Akatsuki no Kessen)

An all-star cast led by Ichikawa Utaemon, Satomi Kotaro, and samurai film legend Otomo Ryutaro tell the story of Araki Mataemon and his journey of swordsmanship. After mastering the Yagyu Shinkage-ryu sword style under the tutelage of Yagyu Jubei Mitsuyoshi, Mataemon teaches the shogun’s instructor the final three secret forms that were left after Jubei’s untimely death. Life is not simple however, as Mataemon sets out to help his brother-in-law avenge the brutal murder of his father. Bloody Battle At Dawn more than lives up to its name in this violent undertaking that leaves a trail of butchered bodies in the Vendetta of Samurai at Kagiya Crossroads!