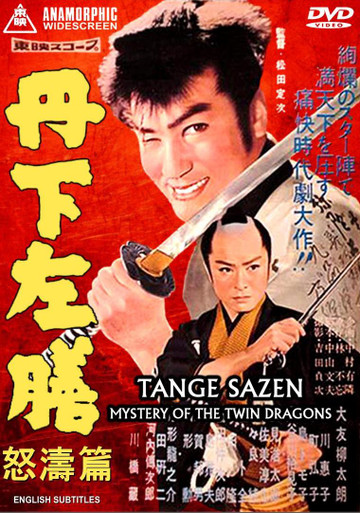 The actor most identified with the role of Tange Sazen, the one-eyed - one-armed swordsman, was Otomo Ryutaro, who was one of the major stars of the 1950's and 60's. He followed one of the great stars from the silent era Okochi Denjiro in portraying the crippled samurai. In this, the third film in the long running series, Tange Sazen and his friends are asked to guard a dragon-shaped incense burner that holds the key to hidden treasures. This is the most exciting film in the series, and contains some of the best action sequences of Otomo's distinguished career. Sazen is the strongest swordsman of his time, and his sense of honor and justice are called upon more than once to set things right. This film features an appearance by the great star of classic chambara, Okochi Denjiro, the actor who, in essence, created the role of Sazen in the first place.