TANGE SAZEN - THE POT WORTH A MILLION RYO 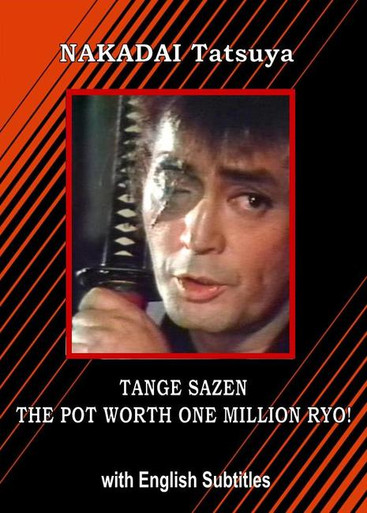 TANGE SAZEN - THE POT WORTH A MILLION RYO

Gosha's remake of his own 1966 classic "Secret of the Urn" this time with Nakadai Tatsuya in the title role.  The master filmmaker reverses all the sequences in this version making it a fantastic comparison piece.

One of the great masters of the cinema, GOSHA Hideo, got to remake one of his most highly regarded classics, in this made-for-TV movie.  The legendary One-Armed, One-Eyed Swordsman, Tange Sazen has long been a part of Japanese lore.   While the story has been told many times, it has never been done quite like this.  GOSHA, who directed the most famous version THE SECRET OF THE URN has retold the classic using NAKADAI Tatsuya as the brilliant swordsman who has been betrayed and left for dead.  Featuring some of the finest actors in the samurai genre, including the powerful NATSUYAGI Isao, along with the lovely MATSUO Kayo.. Plenty of action, and a unique jazzy soundtrack make this great!