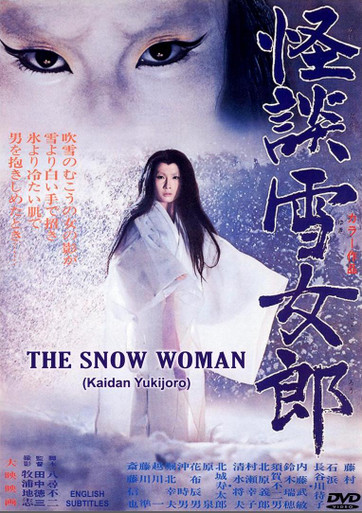 This expanded version of Lafcadio Hearn’s ”Snow Maiden” by master filmmaker Tanaka Tokuzo is a much more complete and compelling telling of this well known Japanese folktale, made famous in the West by Kobayashi’s ”Kwaidan.” A brilliant performance by Fujimura Shiho (beautiful co-star in many films with Ichikawa Raizo) highlights this stunning trip into the supernatural with superb special effects that will chill you to the bone. After two sculptors of Buddha statues are forced to take shelter in an abandoned hut during a blizzard, the evil Snow Woman enters and with her icy breath, freezes the elder to death. But taken with the handsome visage of the younger man, she spares his life when he promises never to tell anyone of the incident. A short time later a beautiful young woman named Yuki takes shelter from a torrential rainstorm at his home where she is asked to stay and become his wife. The haunting music of Ifukube Akira is the perfect backdrop for this marvelous work of art.