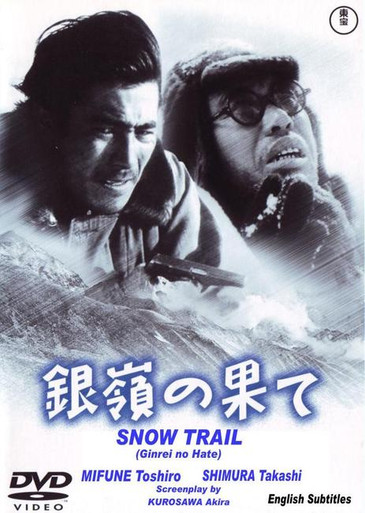 In his first starring role, Mifune Toshiro plays against type as one of three bank robbers who are being pursued into the mountainous Nagano Prefecture, the so-called "Japanese Alps", by a dogged group of police who refuse to give up the chase. Shot on location with a script by Kurosawa Akira, this is a brutal motion picture that shows just what ends desperate men will resort to.  Co-starring Shimura Takashi as the leader of the group they must attempt to cross the mountains in the dead of winter, while trying to survive an avalanche and avoid their pursuers who seem to be gaining on them by the minute.  Mifune's screen presence displays his star power in an auspicious debut.  Powerful drama with surprises galore along the way!