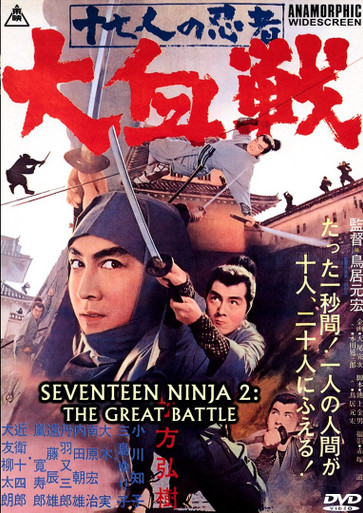 In a Toei all-star effort, Matsukata Hiroki, Otomo Ryutaro, and Konoe Jushiro combine to create an exciting black and white sequel to the classic story of 17 Ninja, one of the most famous films from that noted studio. In the year 1651 the Kishu clan is about to rise against the Tokugawa shogunate using a stash of muskets being guarded by Jinza the leader of the Koga ninja. The Iga ninja are called upon to stop the revolt under the leadership of Hattori Hanzo setting off a spy versus spy battle of silent ninja stealth. Through all the turmoil, Shizaburo and Yuka have broken the taboo of ninja falling in love and strive to achieve the forbidden life of happiness that is denied to all members of the ninja class. This is a true ninja classic from the golden era of Japanese cinema!