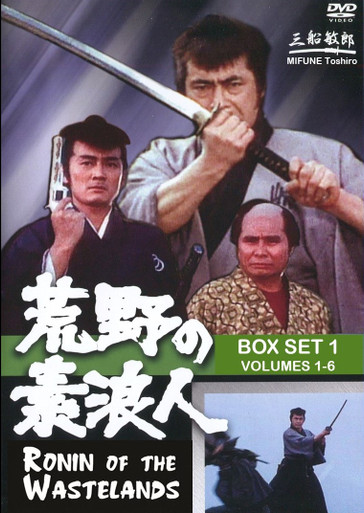 RONIN IN THE WASTELANDS (Koya no Suronin)

and KAJI Meiko as "Whirlwind" Ofumi

Box set containing the first 13 episodes of the exciting Ronin in the Wastelands TV series, produced by and starring Mifune Toshiro as ”Mountain Pass” Kujuro, a wandering swordsman similar to the Yojimbo character created by Kurosawa Akira. While he is not looking for trouble, trouble always seems to find him. Along with a gun-toting former samurai and a fast talking conman they travel the highways and byways of old Japan running into adventure at every turn. Followed by "Whirlwind" Ofumi, a woman seeking revenge against him, Kujuro’s expert swordsmanship is called upon time and again as he unerringly fights corruption and aids people in need of help!

Volume 1
Episode 1: Fighting for Justice
Episode 2: Go Back, Sado Homeless
Episode 3: A Vow to Kill - The Highway of No Return

Volume 4
Episode 8: Revenge! Woman of the Kurobane
Episode 9: Escape From the Valley of Death

Volume 5
Episode 10: Treason! Duel at the Hidden Fort
Episode 11: A Duel to the Death

Volume 6
Episode 12: The Woman of Red Valley
Episode 13: The Path of Love and Death