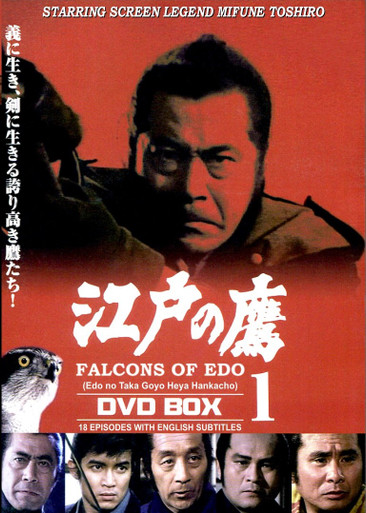 In the 1770's, the shrewdest man of the age, Tanuma Okitsugu, had abused his political power, and the corruption of government officials and moral decay of the public were prevalent.

At that time, there was a box for complaints made by the general public. It was called "Meyasubako" and was placed at the front gate of the central government's Supreme Court. The appeals went directly to the shogun who assigned the “Otakagumi” (Falconers Unit) to investigate. Led by Uchiyama Kanbei (samurai superstar Mifune Toshiro) they fought injustice and helped the oppressed.  Not only were they skilled swordsmen, but their trained falcons would swoop down on enemy troops, especially those using firearms. Superb fighting throughout with Mifune at the forefront in one of his finest roles.

1.) THE FALCONERS' UNIT IS BORN

6:) FALCONS ON THE OSHU ROAD

8.) FALCONS FLY OVER THE RUINED TOWN