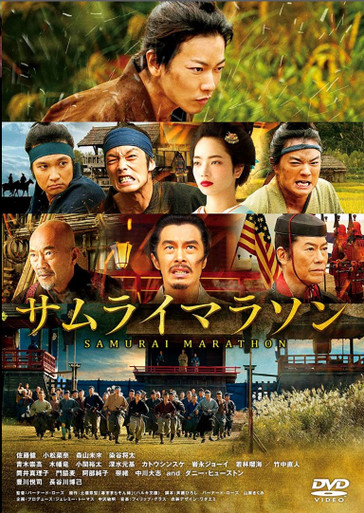 Beginning with the arrival of Commodore Perry’s “Black Ships,” Japan is on the brink of change. A young ninja is operating undercover in the court of an aging lord during the final days of the Tokugawa shogunate. After the lord challenges his lazy samurai clansmen to a punishing marathon to toughen them up, the ninja finds his loyalties put to the test. Into the mix comes the lord’s rebellious daughter, Princess Yuki, a heroine who escapes the castle to take part in the dangerous marathon in disguise. Facing impossible odds, this unusual band of characters are running to win or die. The film is inspired by a real-life race that is still held annually in Japan.

Samurai Marathon 1855 Trailer for the 2019 Samurai Movie starring Takeru Satoh, Nana Komatsu, Mirai Moriyama and directed by Bernard Rose. Subscribe for more: http://www.youtube.com/subscription_center?add_user=NewTrailersBuzz The American imperialists are at the door and intruding on Japan. To assess and train his troops the lord of the land announces a marathon through the land crisscrossing shores, forests and the mountain. The shogunate in Edo was not approving and views word of the contest with contempt and suspicion. Spies and moles are dispatched. One mole realizes the misunderstanding and is determined to stop lives and alliances being lost. He runs. Samurai Marathon 1855 Trailer © Well Go USA