SONG OF THE GENKAI SEA 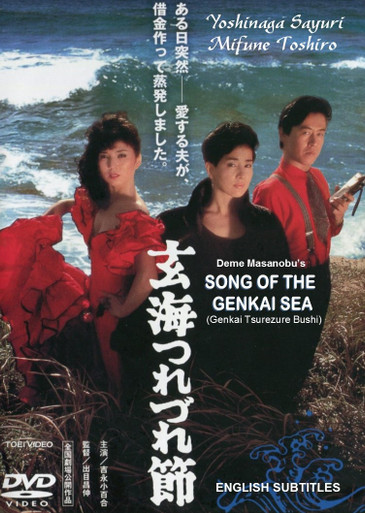 SONG OF THE GENKAI SEA

A young woman’s life is turned upside down when her husband disappears, leaving behind numerous debts and his illegitimate child. Desperate to track down her missing husband, she travels to their hometown in Kyushu, the southernmost of Japan’s main islands in hopes of finding clues to his whereabouts and in the process discovers disturbing secrets about the man she loves. This is a heartfelt story, tinged with touches of humor and a view into the Japanese psyche. Featuring an impressive performance by Japanese screen legend Mifune Toshiro as the powerful business magnate who plans to uproot the local people and develop the area with department stores and hotels.

During the movie an interesting subject came to light. There are brief clips from an old black and white samurai film called ”Fuun Kuroshiomaru.” Researching that title led to the following information about the Kuroshiomaru or ”Black Current” of the Pacific Ocean which similar to the Atlantic Ocean’s ”Gulf Stream is a strong western boundary current. According to the Smithsonian Magazine a contingent of scholars makes a compelling case for repeated wash-ups by Japanese castaways over the past six thousand years. Follow the link for the full article.