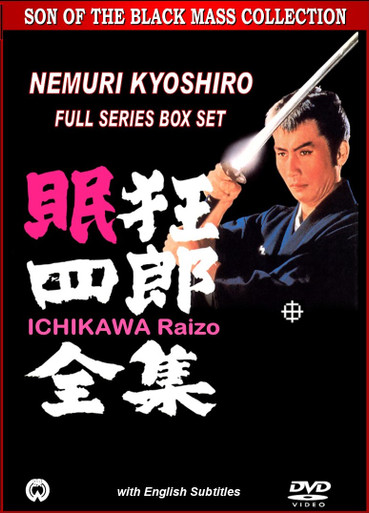 Ichikawa Raizo’s most famous role as the peerless half-breed swordsman Nemuri Kyoshiro ran through a dozen feature films from 1962-1969, ended only by Raizo’s untimely death at the age of 39. This box set contains all twelve films in glorious 16:9 anamorphic widescreen as Kyoshiro runs into trouble time and time again. A master of Engetsu Sappo (the mystical ”Full Moon Cut”) which draws his opponents to a certain death, he lives by his own set of rules and morals. The offspring of a Satanic ceremony performed by a caucasian priest who raped a Japanese woman of high standing he has contempt for the hidden Christians and corrupt government officials who constantly confront him. His Muso-Masamune sword is a famous blade that has felled countless opponents. He is a rogue, or anti-hero who hates those who take advantage of the less fortunate. Brilliant stories with blazing swordsmanship highlight this entire series.