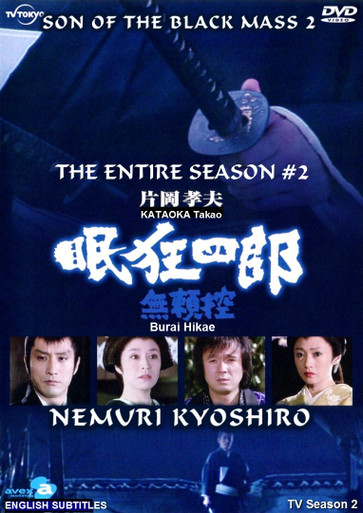 His travels over, Nemuri Kyoshiro has returned to Edo, and is still a magnet for trouble. Kataoka Takao gives an outstanding portrayal of the half-breed ronin, who follows his own sense of justice. No longer accused of being an agent of the government, he soon finds himself attacked on all sides by a variety of enemies as he is drawn into helping those who cannot defend themselves. When the boat hotel he stays at is in jeopardy of being taken over, he must step to the forefront in order to save the lives of those who work there. Exciting sword action by the master of the Full Moon Cut!

This TV series version of the Son of the Black Mass maintains the high standards set by Ichikawa Raizo in the dozen feature films released by Daiei in the 1960’s. Kataoka Takao gives an impressive performance as the half-breed ronin with his own unique sense of justice and almost mystical “Full Moon Sword Style.”

The superb action sequences were created by Kusumoto Eiichi, the swordfight choreographer most noted for the first 5 Baby Cart to Hell movies as well as the Zato Ichi TV series. Also a veteran of the Baby Cart series, Shishido Daizen first rose to prominence in the Shnobi no Mono series before taking on the 6 Kozure Okami films.