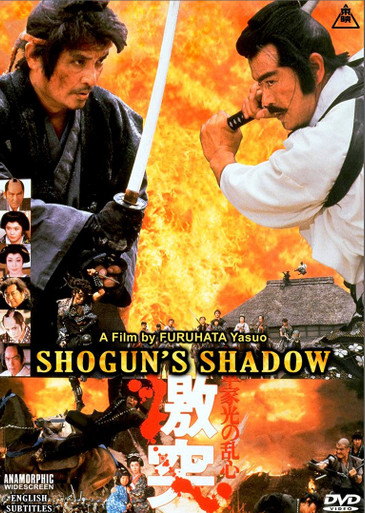 and CHIBA Shinichi as IBA Shozaemon

Under orders of Shogun Iemitsu, who has descended into madness, a group of swords-men led by Igo Gyobu must bring the young heir Takechiyo safely across country for a ceremony he must take part in at Edo Castle. Iba Shozaemon, the nation's greatest swordsman has been ordered to assassinate the child and leads attack after attack in his efforts to carry out his mission. High powered action sequences the likes of which have never before been seen make this one of the greatest films of all time.

As they had done just over a decade earlier when they produced the film YAGYŪ ICHIZOKU NO INBŌ (aka "The Yagyu Conspiracy", aka "Shogun's Samurai"), TOEI promoted SHŌGUN IEMITSU NO RANSHIN: GEKITOTSU (aka "Shogun’s Shadow") as a return to tradition and the start of a new Jidai-Geki revival. Heralded as a new style of action Jidai-Geki, the film opened on January 14, 1989 and proved that lightning can in fact strike twice, becoming anotherbox-office success.