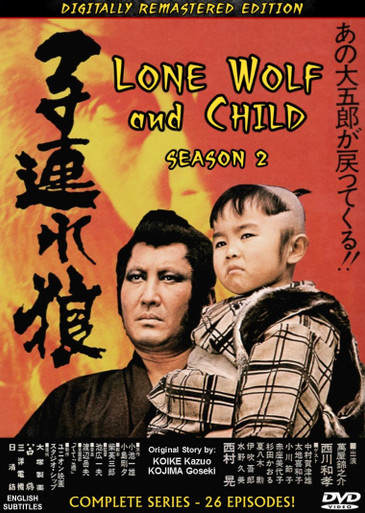 SPECIAL SALE AT A 33% DISCOUNT!
COURTESY OF ICHIBAN

Moving from the big screen to your living room, the Lone Wolf and Child series continues the story of Ogami Itto and his son Daigoro as they seek revenge against the evil Lord Yagyu who murdered Ogami’s wife and framed him as a traitor. The assassin and his son take on assignment after
assignment in order to raise enough money to mount their final attack on the Yagyu clan. Bearing an uncanny resemblance to the original ‘manga’ character, Yorozuya Kinnosuke is outstanding in the lead role. Now on DVD for the first time in remastered form with superb picture quality and optional English subtitles the curtain raises as the Lone Wolf and Child take to the road along the edge of Hades as they encounter danger at every turn on their ultimate quest for vengeance!