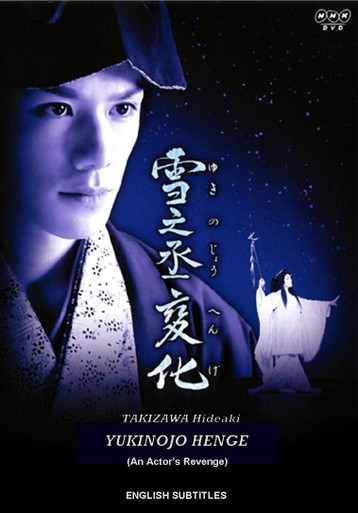 Nakamura Yukinojo gains popularity in Edo's kabuki scene as a handsome 'Onnagata' (a male actor who plays female roles). But hidden behind the placid expression of his stage face is a deep grudge for the men responsible for dishonoring his parents' names and leading them to suicide when he was still a child. When he discovers that the mastermind behind those crimes has come to see him act onstage, he begins in earnest to plot his revenge. With the help of a renowned Robin Hood-like thief named Yamitaro, he makes out his first target: the daughter of the man who orchestrated his parents' demise. The drama is based on a 1935 film of the same name, but the story is better known by the 1963 remake "An Actor’s Revenge" directed by Ichikawa Kon, which featured Hasegawa Kazuo as Yukinojo/Yamitaro.