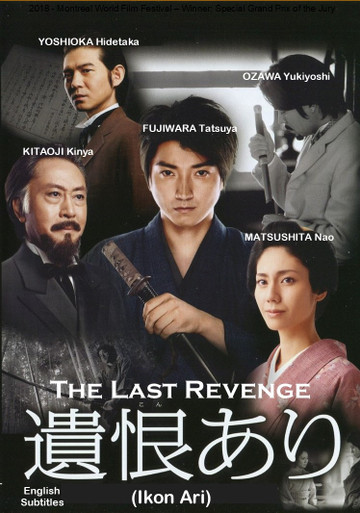 and KITAOJI Kinya as YAMAOKA Tesshu

Based on the true story of the last officially recorded case of "Adauchi."

1868 – In the fifth month of the lunar calendar, on the brink of the new Meiji era, Usui Watari, the administrator of the small domain of Akizuki in Kyushu, and his wife, were assassinated by orders of the clan’s anti-Western faction leader. Blazing anger grew in their son, Rokuro, who had witnessed the bloody aftermath. As the family sought revenge, the very official who had ordered the slaying forbid such action. Along with that, the changing times dealt a cruel blow to Rokuro. Official vengeance (Adauchi), once a samurai’s virtue since the Kamakura era 700 years before, had now been outlawed and was declared murder… A crime that should be hated with the passage into the Meiji era. Growing up and studying swordsmanship under the man historically known as Japan’s last true samurai, Yamaoka Tesshu, Rokuro prepares to wreak vengeance on the killers, no matter the cost to himself! A brilliant work from the pen of noted author Yoshimura Akira, this film brings a bloody page of Japanese history to life!