ZENIGATA HEIJI COVERS ALL OF EDO 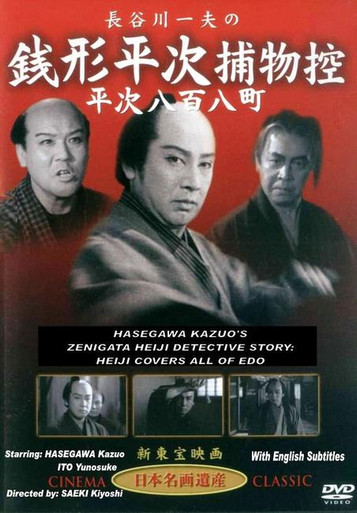 ZENIGATA HEIJI COVERS ALL OF EDO

Police detective Heiji is assigned to catch the masked Maboroshi gang of robbers who have terrorized all of Edo leaving few clues as to who their leader is.  Heiji is best known for his tactic of coin-throwing with deadly accuracy in order to capture criminals leading to his nickname “Zenigata” (zeni are coins).  In other words his success comes by throwing money at problems (sorry, I couldn’t resist).  The tactic does work well on film and there are some good action scenes showing him in action.  The character was quite popular and Hasegawa made a fairly large number of these films and the series did continue eventually with Okawa Hashizo taking over the lead, however none of the Okawa versions are yet available on DVD.  This movie co-stars Ito Yunosuke, who eventually went on to world wide fame (infamy) as Lord Yagyu Retsudo in the ‘Baby Cart’ series.   Starring: HASEGAWA Kazuo, ITO YunosukeDirected by: SAEKI Kiyoshi