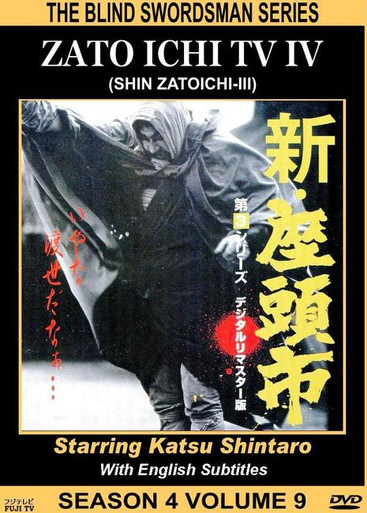 
These two episodes were written and directed by one of Japan's most distinguished filmmakers Teshigahara Hiroshi and elevate the Blind Swordsman from genre hero to fine art. After 25 feature films from 1962 through 1974, the television series lasted 4 years and helped keep alive the legend of the blind wandering gambler/masseur with the lightning fast sword. There were 100 episodes over the 4 seasons and while all of them are very good to excellent, this 2 part finale brings the series and the character to an exciting conclusion unlike anything that ever went before or after.
Episode 99: "The Rainbow Journey" takes Ichi to the inner chambers of a daimyo lord's concubine. A beautiful woman with a deadly secret holds the key to a treasure chest containing 1,000 gold coins. Can Ichi survive against the political activists who want to bring down the government with their bloody blades?Episode 100: "The Dream Journey" intersperses Ichi's innermost fears and desires with the harsh realities of being a blind man who dreams only of being able to see the sun once more before he dies. With spectacular cinematography and plenty of dynamic swordplay, can Ichi conquer fear and defeat his most formidable adversary?    See Zato Ichi like never before in this stunning work of art!