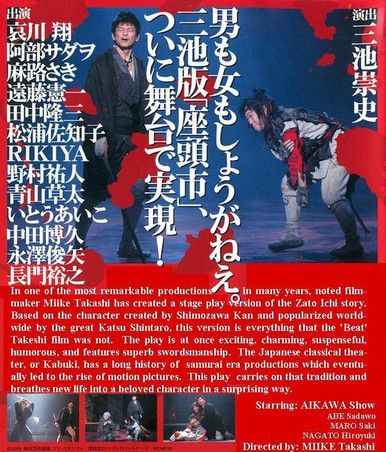 MIIKE TAKASHI'S ZATO ICHI-THE STAGE PLAY
(Zato Ichi) 2010 166 min. Anamorphic Widescreen (16:9)
Starring: AIKAWA Show
Written and Directed by: MIIKE Takashi
In one of the most remarkable productions in many years, noted filmmaker Miike Takashi has created a stage play version of the Zato Ichi story. Based on the character created by Shimozawa Kan and popularized worldwide by the great Katsu Shintaro, this version is everything that the 'Beat' Takeshi film was not. The play is at once exciting, charming, suspenseful, humorous, and features superb swordsmanship. The Japanese classical theater, or Kabuki, has a long history of samurai era productions which eventually led to the rise of motion pictures. This play carries on that tradition and breathes new life into a beloved character in a surprising way.