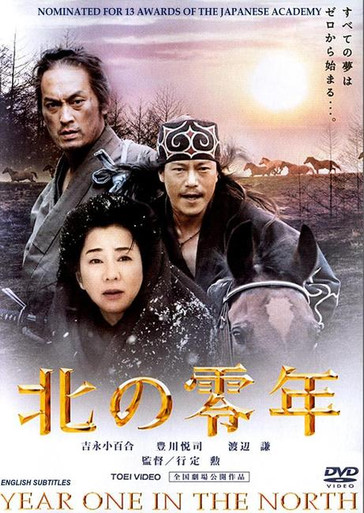 This is the epic tale of the Inada clan who were sent from their home in Awaji by the new Meiji government in order to settle the newly colonized island of Hokkaido. Formerly known as Ezo, this far northern island was populated by only by savage wild beasts and the aborigines known as Ainu. Led by Squire Komatsubara Hideaki and his wife Shino, this hardy group of pioneers who have never seen snow must somehow find a way to survive the brutal winters with no help from the government that sent them there. Emotions explode when that same government decides to seize the island’s highly trained horses; Hokkaido’s only natural resource, to use against Saigo Takamori and his Satsuma Rebellion. Beautifully filmed on location, this heartfelt drama features a powerful performance from Japan’s most popular international star Watanabe Ken as Squire Komatsubara, a man who stood face to face with destiny!