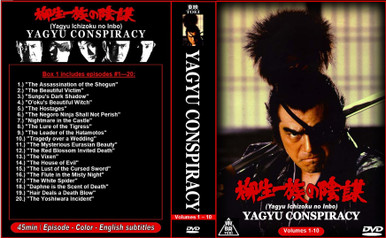 and  YAMAMURA So as YAGYU Munenori

SPECIAL ORDER ONLY - ONE AVAILABLE!

This complete set of 19 DVD's contains all 39 episodes, UNCUT AND UNCENSCORED, mastered from new prints, with removable English subtitles.

"The secret doctrine of Ura Yagyu (Yagyu Spy) states:
Once engaged in battle, fight to win.
That is the first and cardinal rule of battle.
Suppress all human emotions and compassion.
Kill whoever stands in your way, even if that be God or Buddha.
Only then can one master the essence of the art.
Once it is mastered, thou shall fear no one, though the devil himself may block thy way..."

One of the most memorable roles for Sonny Chiba was his portrayal of Yagyu Jubei, the one-eyed master swordsman who helped protect Shogun Iemitsu during the early days of Japan's 17th Century. The Yagyu Clan under Jubeiï’s father Yagyu Tajima, must protect young Shogun Iemitsu from the plots of those seeking to overthrow him. This show consists of 39 hour-long episodes which feature awesome fighting from the Japan Action Club!