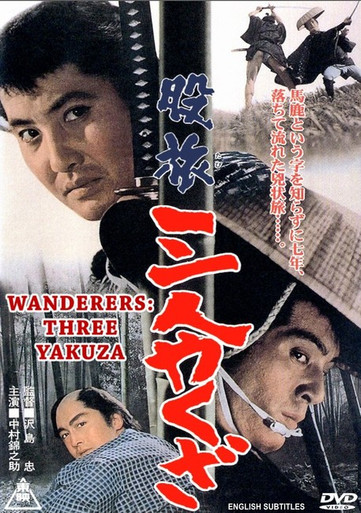 WANDERERS: THREE YAKUZA
1965 - Color - 85 min. Remastered Anamorphic Widescreen (16:9)
COURTESY OF ICHIBAN
ON SALE AT A 40% DISCOUNT!
Starring: NAKADAI Tatsuya, MATSUKATA Hiroki, SHIMURA Takashi, NAKAMURA Kinnosuke
IN STOCK READY FOR IMMEDIATE SHIPPING
Directed by: SAWASHIMA Tadashi
Toei Films presents a jidai-geki film like no other. This is the tale of three roving gamblers who traveled Japan during the samurai era, living by their wits and sword skills. Told in 3 separate vignettes, each part tells the story of a different drifter’s life. This is a superb film, with great action complemented by gripping stories. Part 1 with Nakadai Tatsuya is the story of a man on the run after killing 2 Hasshu officials to avenge his boss. He must make a life or death decision as he is asked to protect a gang from attack. Part 2 with Matsukata Hiroki and Shimura Takashi as a pair of gamblers chased out of a crooked game that must fight not only their pursuers, but the ghosts of their pasts as well. Part 3 with Nakamura Kinnosuke as a wanderer who wants to live according to the Gambler’s Code, but is not sure that he can do so when asked to save a town from an evil official.