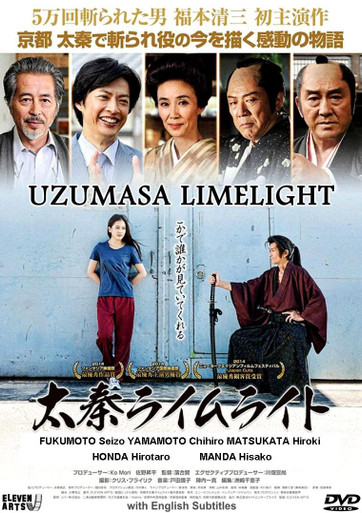 This is a brilliant film in the spirit of Kurosawa's 2 versions of TATESHI DANPEI aka THE FENCING MASTER, which also pits an aging sword actor against the changes in Japanese entertainment that threaten to become too Westernized and lose the essence of Japan's culture, that of the samurai. A bravura performance by the great Matsukata Hiroki as the major star of a samurai television series wielding his sword with tremendous skill adds authenticity to the production.

Kamiyama Seiichi (Fukumoto Seizo) is employed at a Kyoto studio as a "kirare-yaku" or "drop-dead" actor: a swordsman extra in samurai films who is always killed off in the fight. For 40 years he has been appearing in this capacity on a continuing TV samurai drama starring the hereditary kabuki actor Onoe Seijuro (Matsukata Hiroki) and, before him, his father (Kobayashi Nenji). At the start of the film, the cast is suddenly informed the show has been cancelled, to make way for a new period drama with younger actors and staff. This new drama uses CG trickery, inauthentic costumes and anachronistic props. Kamiyama and his small cohort of veteran drop-deads scrounge to find new roles at the studio, but disrespect from younger staff relegates them to performing in sword demonstrations for visiting tourists. (There is still a period studio in Kyoto at which these on-set "ninja shows" are done: the Uzumasa of the title).