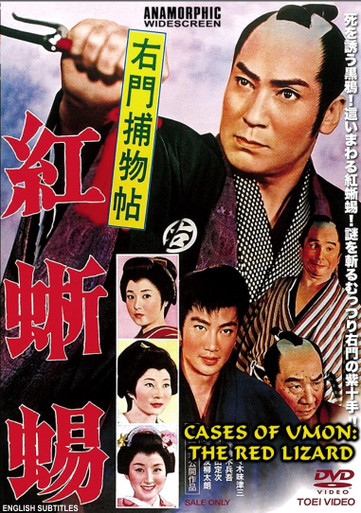 In this terrific mystery film, noted samurai era detective Kondo Umon’s life is in the balance after he lets his guard down allowing the dangerous thief, and accused murderer the ‘Red Lizard’ to escape. After a series of brutal murders, the magistrate gives Umon just 5 days to recapture the fugitive or he must slice open his own belly in ritual suicide. Adding to the mess are the bumbling Detective Murasaki, two beautiful women, and a young ronin with a shady past. Helped as always by the clumsy but loyal Denroku, this is the finest entry in the long running series. Does a trained crow hold the key for Umon to unravel the twisted story behind this rash of murders? Featuring a final act played out on the stage of Edo’s main theatre that rivals those of the Thin Man movies!