TRAITORS OF THE DATE CLAN 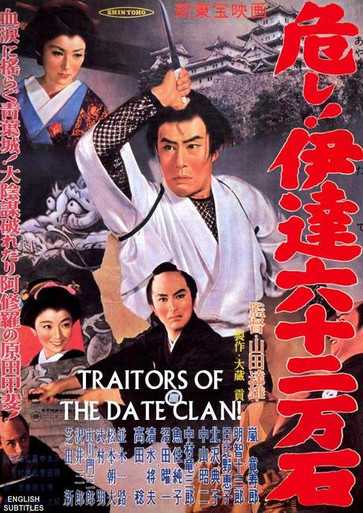 TRAITORS OF THE DATE CLAN

Starring: ARASHI Kanjuro
Directed by: YAMADA Tatsuo
IN STOCK, READY FOR SHIPPING!
The true story of the "Date Disturbance" of 1671, when the clan's chamberlain attempted to usurp power for himself and depose the lord!  This great movie has also been called "Traitors of the Blue Castle", an early classic that is little known outside of Japan.

It's Japanese history come to life in this true tale of upheaval in the Date clan. A serious incident that threatened the very exist-ence of the Date clan in the late 17th Century is told in a "no holds barred" rendition of the Date Disturbance when Harada Kai, the clan's Chamberlain attempts to take power from the lord himself. Arashi Kanjuro, one of Japan's earliest movie stars gives a noteworthy performance as the traitorous clan official, who is not afraid to draw his sword when confronted. The subject of a Kabuki by Chikamatsu, this is a movie not to be missed!