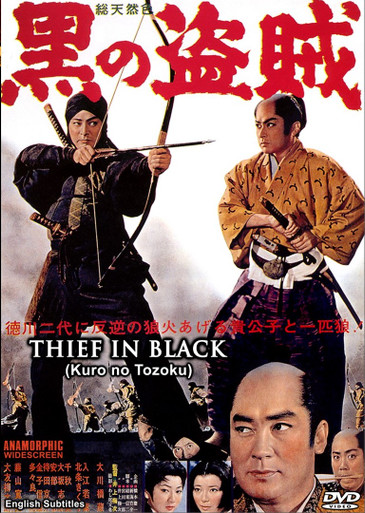 THIEF IN BLACK (Kuro no Tozoku)

The late Okawa Hashizo plays a dual role, showing the full range of his acting ability. First, his wild side as the chivalrous robber Musashi Kotaro, who is called "The Thief in Black." Secondly, his highclass intelligence as Tachibana Jiro, a direct retainer of the shogun known for his strong sense of justice. Set during the reign of Hidetada, the 2nd Tokugawa shogun, Jiro was an envoy to the peace negotiations, and much to their surprise, they found that Kotaro and Jiro looked almost alike. While everyone is taken aback by this, a major brawl occurs! Eventually, it is discovered that they are, in fact, twins! Director Inoue Umeji, who specialized in fast-moving ninja action has created one of his best works, a true ninja classic, made during Toei's heyday in the mid-1960's.