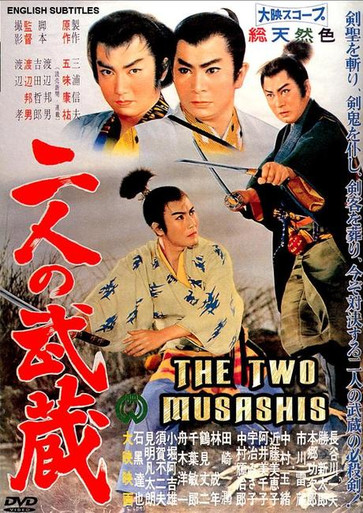 THE TWO MUSASHIS (Futari no Musashi)

SPECIAL SUMMERTIME SALE AT A 50% DISCOUNT WITH FREE SHIPPING!

During the reign of Shogun Hidetada, both Hirate Musashi and Okamoto Musashi strive to become the finest swordsman in the land by defeating the Yagyu clan's top instructors and then taking on Sasaki Kojiro! Three of Daiei’s top sword stars combine to create this exciting alternative version of the Musashi legend. Superstar Hasegawa Kazuo leads the cast as Hirate Musashi while a young Ichikawa Raizo competes with him as Okamoto Musashi. They must not only contend with the Yoshioka and Yagyu fencing schools, but have to take on Katsu Shintaro as Sasaki Kojiro, and deal with the women who pursue them for love. Unlike the Yoshikawa Eiji novel which is not historically accurate, this film offers a new view of Japan’s greatest hero!