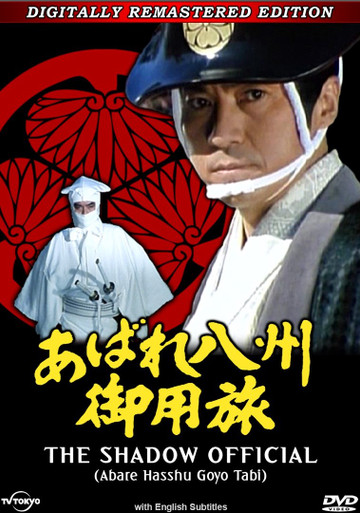 THE SHADOW OFFICIAL - MERCILESS TEARS ON THE SMUGGLER'S ROAD

Todo Heihachiro is an undercover Hasshu Official with a license to kill.
He patrols his section of Japan with the help of a team of other agents, including an expert swordsman, a ninja and a woman skilled in throwing knives. Starring Saigo Teruhiko (Misumi’s Last Samurai) along with the ever popular Ryu Raita, they must solve the mystery of the forbidden map in the dead man’s hands and contend with one of Japan’s most famous swordsmen in the person of Hirate Miki (best known as the tubercular ronin from the first Zatoichi movie). While acting as ’Bodyguard’ for a local Yakuza, Hirate, whose swords-manship is impeccable, must take up arms against a vicious enemy. Will Hirate and the Hasshu have to face each other in a duel to the death, or will they join together in order to fight corruption and evil.