THE ROAD OF CHIVALRY 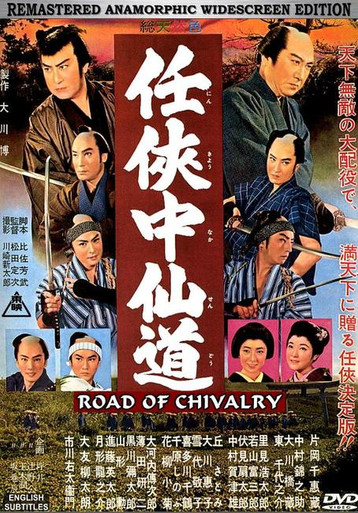 THE ROAD OF CHIVALRY

A ROAD OF CHIVALRY (Ninkyo Nakasendo)

This is the big one. An all-star extravaganza beyond any that's come before. Featuring virtually all the greatest actors from Toei Studios, comes a tale of violence and intrigue among the traveling gamblers in old Japan. While on the road, famed Yakuza Boss Jirocho is falsely accused of starting a peasant's uprising and chased by the law. Mean-while, one of his henchmen in an attempt to raise money for the Boss gambles away not only all their funds, but their clothing as well. Jirocho, famed for his honesty and integrity must take on the challenge of rival gangs while trying to elude the government's officials at the same time. Things really heat up when the most famous of all Yakuza Bosses, Chuji of Kunisada gets involved. Will he team up with his old friend or is gang warfare about to erupt?