The Newest From Ichiban - NINJA'S MARK: SECRET OF THE FYLFOT 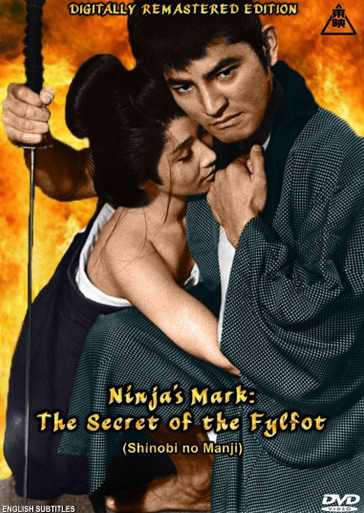 The Newest From Ichiban - NINJA'S MARK: SECRET OF THE FYLFOT

NINJA'S MARK: SECRET OF THE FYLFOT (Shinobi no Manji)

The year 1630, during the reign of Shogun Tokugawa Iemitsu… One of the three ninja clans serving as internal security within Edo Castle is sabotaging His Excellency’s every attempt to sire an heir, and it’s up to roguish, loose-cannon, former Yagyu-shinkage anti-shinobi freelancer Shiinoda Toma to get to the bottom of it all. Armed with a sword that vibrates whenever a ninja power is used, Toma is knee-deep in Iga, Koga and Negoro ninja — both male and female — and assailed by outré shadow skills like body swapping, poison blood rays, and transforming courtesans into half fish-women. And when he meets his match in the form of whip-wielding kunoichi femme-fatale Kageroi, a deadly romance blooms. ‘Pinky violence’ legend Suzuki Noribumi delicately balances tonge-in-cheek eroticism and sublime ninja mysticism with more grounded fight choreography and some grisly kills. Gorgeous set-bound cinematography and a haunting orchestral score surround a cast of quirky, engaging characters and a plot based on a novel by prolific ninja scribe Yamada Futaro (Makai Tensho, Iga Ninpocho). Shinobi no Manji pushes the envelope of the ninja genre and belongs in everyone’s shinobi cinema collection.