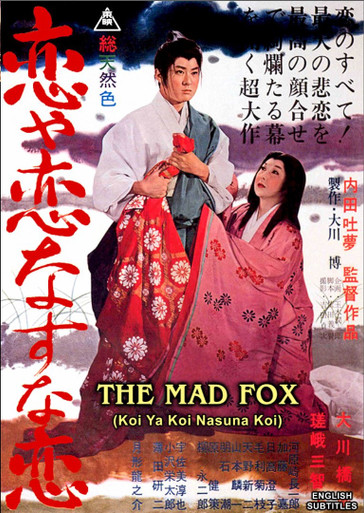 Uchida Tomu’s strangest and most stylized film is a visual feast, adapted by Yoshikata Yoda from a traditional puppet play, it combines Japanese folklore, kabuki, animation, fantasy, and action. Telling a tale of cunning, love, and betrayal in 10th century Japan it breaks the boundaries of ordinary moviemaking elevating it to high art. Led by megastar Okawa Hashizo as Abe no Yasuna as an astronomer asked to consult a certain Chinese book of secrets in order to quell the fears of Emperor Suzaku after the appearance of a strange white rainbow over Kyoto. Falling in love with the adopted daughter of his mentor, who is brutally murdered he then weds her younger sister... But is she really a human being or the deadly fox spirit that seeks revenge? Reminiscent of Toyoda’s Portrait of Hell and Kobayashi’s Kwaidan, this is a cinematic triumph of epic proportions!