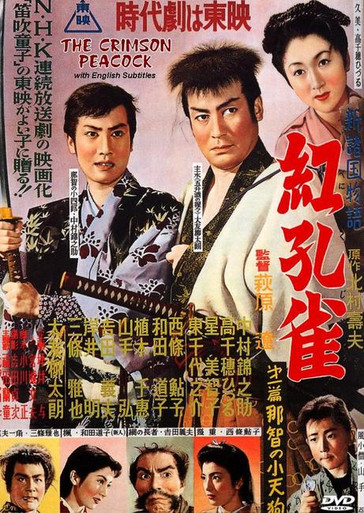 THE CRIMSON PEACOCK - 5 Movie Box Set(Shin Shokoku Monogatari Beni Kujaku)Courtesy of Ichiban1954-55 - b&w - Toei Films - 272 minutes - Academy Standard (4:3)
Starring: NAKAMURA Kinnosuke, AZUMI Chiyonosuke, OTOMO RyunosukeDirected by: HAGIWARA Ryo
One of the greatest film serials ever to come out of Japan puts together an all-star cast in the search for the key of the Crimson Peacock, a treasure trove that will make whoever discovers it the richest man in the world. The battle lines are drawn between two rival groups, the Swans and the Skulls competing to find the key and the map, while unrequited love for a beautiful woman complicates everything as she is forced to take a potion that gives her an evil heart. It’s edge of the seat excitement from start to finish in this 5 movie serial as parts 1 through 4 each end with a cliffhanger, building suspense to the very end when all is revealed! There is action, romance, and intrigue, with a touch of black magic as the forces of good and evil collide!