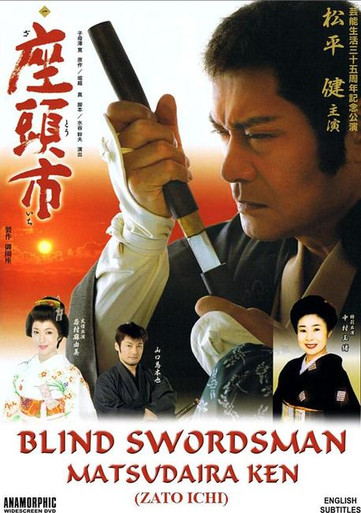 A hidden gem has arrived in the form of a stage play performed in tribute to a pair of Japan’s greatest stars.  On the 35th anniversary of his becoming an entertainer Matsudaira Ken chose to honor his mentor, the legendary superstar Katsu Shintaro by portraying Zato Ichi, the Blind Swordsman in a play based on the original film on the same stage that Katsu had played the role 40 years before in a stage presentation.  Not pleased with the direction that Zato Ichi’s image had been  taken in some productions, he has breathed new life into the character by following the image that Katsu Shintaro had created for his signature role.  Adding authenticity, the cast included both Katsu’s widow Nakamura Tamao and their son Gan Ryutaro.  Coupled with a terrific performance by Yamaguchi Makiya as the tubercular master swordsman Hirata this major event for fans of Zato Ichi is not to be missed!  As a note, all sword action by Matsudaira Ken was performed with his eyes closed, just as Katsu Shintaro would have wanted!