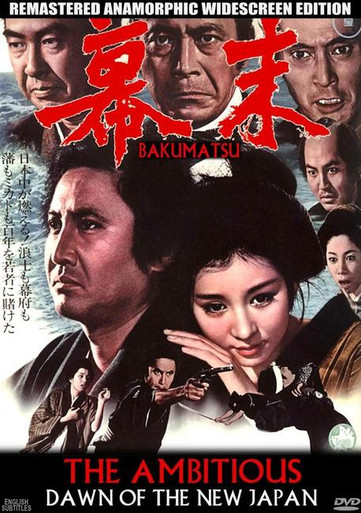 ON SALE AT A 33% DISCOUNT WITH FREE SHIPPING!

The story of Sakamoto Ryoma and the dawn of a new age in Japan.  From famed directed Ito Daisuke, one of the great masters of cinema dating back to the era of silent films.

SEE THE TRAILER AND READ ABOUT THE MOVIE AT MOVIE WEBSITE "WILDGROUNDS":

This is the true story of Sakamoto Ryoma (Nakamura Kinnosuke) generally considered to be the architect of the ”Bakumatsu" (Downfall of the Tokugawa Shogunate) as finally engineered by the joining of the Choshu and Satsuma Clans against the Tokugawa power structure. His dream was to allow the opening of Japan to the West in order to learn its technology and then take that same technology to defeat the West in future battles. Considered an outlaw by his own clan, hunted as a rebel by the government, and hated by both supporters of the Shogun, and Loyalists as well. His is a tale cloaked in danger, and powerful in its historical signifi-cance. Co-starring Nakadai Tatsuya as Ryoma's lifelong friend Nakaoka Shintaro, they share the dream of a modern Japan with a Navy and Army that can stand tall with the rest of the world.