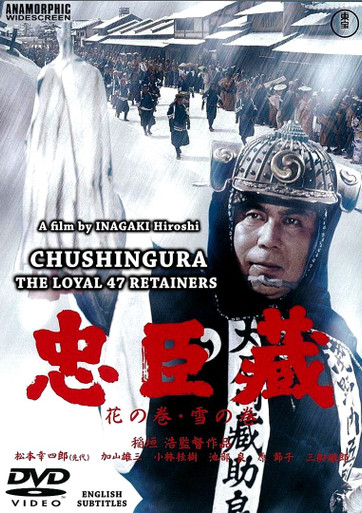 STORY OF FLOWERS - STORY OF SNOW

and MATSUMOTO Koshiro as OISHI Kuranosuke

The main feature of Toho’s 30th anniversary, Inagaki’s “Chushingura” tells the true story of Japan’s most significant event. The revenge of 47 former vassals of the Ako clan who band together to exact revenge for the unjust death of their lord.

Told in two parts “Story of Flowers” and “Story of Snow” this magnificent work of cinema artistry is Japan’s gift to the world. After their Lord Asano is driven to assault the vile Lord Kira in the Hallway of Great Pines at Edo Castle the shogun orders Asano to commit ritual suicide, while not ordering any punishment for Kira who had demeaned Asano beyond the breaking point, thus causing the attack. Adding to this injustice Lord Asano’s Ako clan is abolished, and their land confiscated. Led by Chamberlain Oishi Kuranosuke, a plan is hatched to take revenge for this injustice while appearing to have completely disbanded and lulling the evil lord into a false sense of security. Mifune Toshiro almost steals the show as a wandering samurai whose support will ultimately decide the winner! Remastered with a stunning new anamorphic widescreen print it breathes new life into what is truly the soul of Japanese culture!