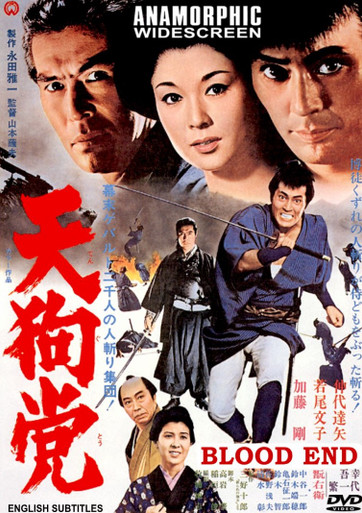 This is one of the most powerful motion pictures to come out of Japan’s ‘Golden Era’. This master-piece is the work of leftist director YAMAMOTO Satsuo, and stars NAKADAI Tatsuya and KATO Go in a tale about the beginning of the end of the era of the Samurai.

As the Shogunate raises taxes beyond the ability of farmers to pay them, large numbers of peasants were ousted from their land, among them Sentaro (Nakadai), who is saved from execution by Kada, a member of the Mito Clan who is part of the new group ‘Tengu-to’ which roughly means the ‘Goblins Group’. They are part of the movement to overthrow the Shogunate and return power to the Emperor, which raised havoc in Japan, and sowed the seeds of civil war.

Sentaro, who has become a Yakuza (gambler) has a chance meeting with Kada, and decides to join the group. Although he is not a samurai, they are accepting the help of common people, as they feel the restoration of the Emperor will benefit the entire nation. Having developed superior sword skill, Sentaro soon becomes a bloody assassin, who sometimes finds he has to kill those who are closest to him. This film has some of the bloodiest fighting and executions ever shown, although it is still tastefully done. A showcase of magnificent swordsmanship and sensational story telling make this one of the true classics of all time.