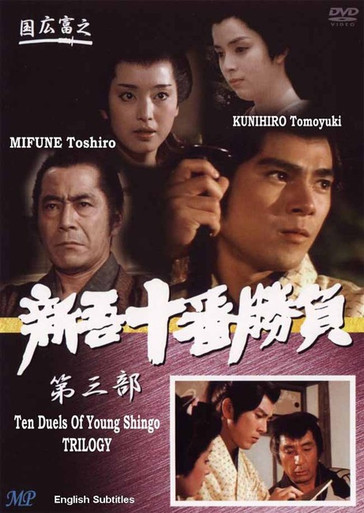 (Shingo Juban Shobu)
1982 - color - 270 min.  REMASTERED Academy Standard (4:3)
Starring: KUNIHIRO Tomoyuki, MIFUNE Toshiro
Director: SAITO Kosei
The classic tale of the shogun's illegitimate son Aoi Shingo is told in three parts as he strives to become the greatest fencer in Japan, while his father Shogun Tokugawa Yoshimune seeks to reunite with his lost son.   When the secrets of Shingo's birth are revealed to him, it sets off a series of events that bring him to cross swords with members of the shogun's inner circle in a series of duels that could change the destiny of Japan. Produced by Mifune Toshiro, Japan’s greatest star, who also gives a masterful performance as Shingo’s fencing instructor and surrogate father.  A brilliant rendition of the rise of Japan’s finest swordsman!