TALES OF THE UNUSUAL 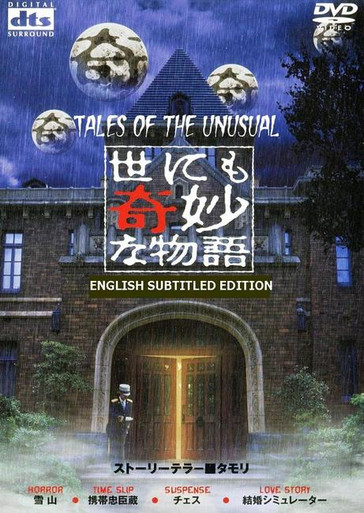 TALES OF THE UNUSUAL

A group of travelers stuck in a train station during a torrential rainstorm pass the time listening to 4 brilliant tales of the unusual as told by "The Storyteller."
Horror (One Snowy Night), Time-Slip (Samurai Cellular), Suspense (Chess), Romance (The Marriage Simulator)

A four-part anthology in the spirit of The Twilight Zone, this film starts off with a group of commuters stranded at a train station in the rain, listening to stories told by one of the group. These include tales of a group stranded in the mountains and haunted by guilt over a death they inadvertently caused, an emotionally broken chess master pressed into playing a real-life game for an eccentric millionaire, a wandering medieval samurai who finds a modern-day cell phone on the ground and a person on the other end asking questions about the past, and a young couple who agree to try a computer simulation of what their future as husband and wife would be like.