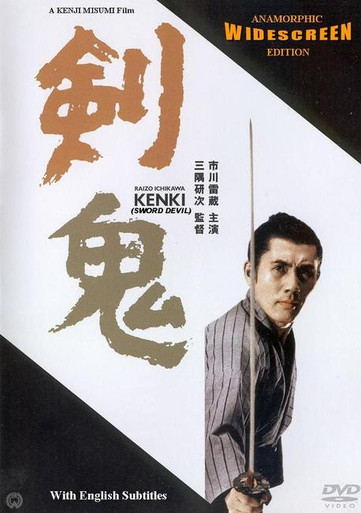 This is a brilliant collaboration between master filmmaker Misumi Kenji and superstar Ichikawa Raizo, from a novel by Shibata Renzaburo, the author who created the Nemuri Kyoshiro series as well as another great classic Destiny’s Son.  In the aforementioned titles Shibata’s work always has something in the way of father issues.  The main character usually does not know his father and was raised in a foster family.  Sword Devil continues this premise and takes it a step further as Hanpei (Ichikawa) is the son of a woman who was never known to be visited by a man, but lived with a dog that many thought was his father.  Dog-Boy Hanpei has certain natural abilities as a gardner who can create beautiful landscapes, incredible speed as a runner, and most of all he is a brilliant swordsman, skilled in the art of Iai-do, the quick draw tactics of an expert assassin.  He thus is asked to kill anyone who may give away the secret of his lord’s insanity, which if exposed would bring about the abolition of his clan.  The film’s title refers to the Japanese belief that a sword can have a devil’s spirit within that brings a curse upon the owner.  As with most of Misumi’s work, stunning cinematography sets the tone, which superb swordplay and an intelligent story make this one of the great unknown classics of Japanese cinema.