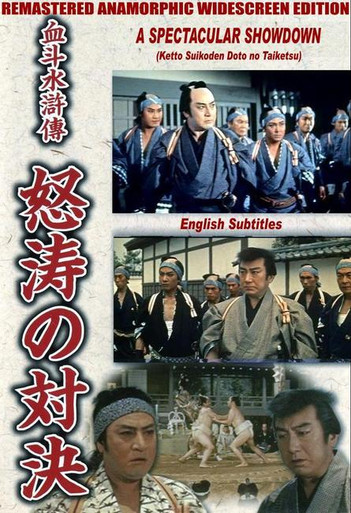 SHOWDOWN AT THE TONEGAWA RIVER

One of the great stories from Japan's rich history comes to life in this true tale of the bloody showdown between two rival yakuza gangs in the 1840's. The battle between Boss Sukegoro of Iioka and Boss Shigezo of Sasagawa has been portrayed many times, most notably in the first Zatoichi film, where the blind man befriends the tubercular ronin Hirate Miki, before cutting him down in one of the great duels in cinema history. This all-star extravaganza pulls out all the stops, with appearances by virtually all of the great actors and actresses from Toei’s studio at the time.  Ichikawa Utaemon’s portrayal of the kind-hearted, noble yakuza boss Shigezo of Sasagawa contrasts sharply with the devious Sukegoro of Iioka.  Corrupt as he may have been, his men were all willing to give up their lives for him.