SOULS IN THE MOONLIGHT Part 01 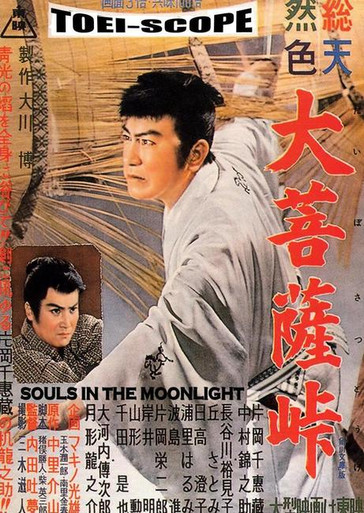 SOULS IN THE MOONLIGHT Part 01

One of the greatest early samurai films is now available in a state of the art widescreen print.
Like the USA, Japan has a rich history told through the use of motion pictures. Timeless stories which have been told many times were done as silent pictures, then re-made again and again in each succeeding era. One of the most often filmed stories is that of of Japan’s greatest novel “The Great Bodhissatva Pass”, which tells the story of Tsukue Ryunosuke, a master swordsman with an evil style, reflecting the evil in his heart. His ruthless ways and merciless killings leave behind an unsettled past which eventually catches up to him.    Reprising his role as Ryunosuke from an earlier version of the story, Kataoka Chiezo shows why he was such a huge movie star. He expertly portrays the slightly sad, and sometimes mad swordsman, pursued by the youthful Hyoma (Nakamura Kinnosuke), who is bent on revenge for the slaying of his older brother.    This film is the first of a trilogy, but goes further than the other versions, not stopping with the fire at the Inn, but going well on into the next chapter of the story. Learn what happened to Ryunosuke after the night of blood and flames!!!