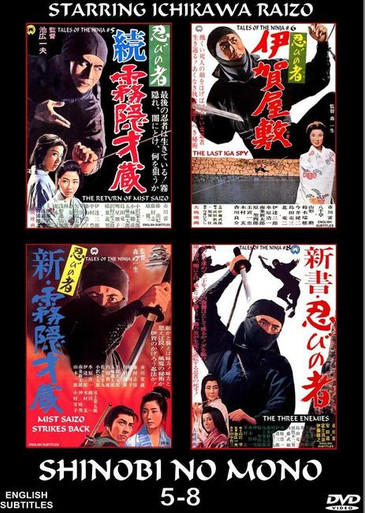 The late Ichikawa Raizo in the final four films in the ninja series that set a landmark in motion picture making.
These movies break the mold of mystical ninja with supernatural powers and show real tactics and techniques used by these black-clad warriors.

TALES OF THE NINJA #6
THE LAST IGA SPY
(Iga Yashiki)

Mist Saizo, and his son Saisuke in their bloody vendetta against Tokugawa Ieyasu; and from an earlier time Kasumi Kojiro in his hunt for the 3 men who brutally murdered his father. Never before or since have there been any movies that accurately portray  ninja in a realistic manner. This box set contains the essence of ninjutsu and the brilliance of Ichikawa Raizo in one of his greatest roles!

TALES OF THE NINJA 5

Staying one step ahead of the shogun’s forces, “Mist” Saizo tries to save Sanada Yukimura by leading his lord west to Satsuma in order to join up with the Shimizu clan and attempt an uprising against the Tokugawa shogunate. Using his remarkable ninja skills, he sets out on a one-man vendetta against Shogun Ieyasu, with the hopes of toppling the new government.  Following the first four films in the series, many more unknown ninja tactics are finally revealed to the world!

TALES OF THE NINJA 6

This film tells the story of Saizo’s son, Kirigakure Saisuke, who after seeing his father die at the Battle Of Shimabara, grows up to be an expert ninja.  Before he dies, “Mist” Saizo tells his children Saisuke, and Yuri that they are not really brother and sister. She, in fact, is the daughter of the late lord Sanada Yukimura, and must be saved from the shogun’s forces.  In the chess match of spy versus spy, can Saisuke defeat the shogun’s chief strategist, Matsudaira Izunokami at his own game?  Showing many exciting ninja tactics, it is not to be missed.

TALES OF THE NINJA 7

Saizo of the Mist returns for the final time as he sets out to assassinate Tokugawa Ieyasu in order to avenge the death of Lord Sanada Yukimura. But first he must contend with Ieyasu’s own ninja group led by the powerful Fuma Daijuro, who has a score to settle with the men of Iga that dates back 280 years to the war between the Genji and the Heike at the Battle of Dan-no-Ura.  Tremendous fighting and great plot twists highlight this exceptional look into the lives of the mysterious ninja of Japan.

TALES OF THE NINJA 8

They saved the best for last with this remarkable movie set as a prequel to the rest of the series. As a child Kasumi Kojiro witnessed the brutal murder of his father, a ninja who had developed a powerful explosive, by three men and grew up seeking revenge. Now an adult, Kojiro (Ichikawa Raizo) has to learn not only who the three enemies are, but master the secret techniques being taught by the revered chief of Takeda Shingen’s ninja during the Warring States Period.  One of the best ninja films of all time, it combines historical events with a brilliant story and superb ninja action.