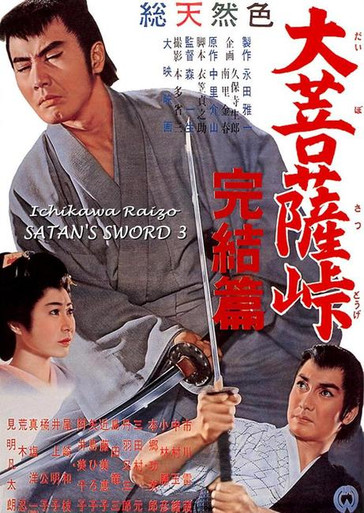 The thrilling conclusion of the epic story as Japan's greatest novel brings the key characters together for the very last time.  Along with the tremendous performance by superstar Ichikawa Raizo is Nakamura Tamao's positively amazing portrayal of three different women who all look alike.  How Ryunosuke has survived against all odds while being chased from one end of Japan to the other by those seeking revenge for his dastardly deeds all leads up to an ending unlike any other in movie history!

Tension mounts as we approach the end of the trilogy. The now-blind Ryunosuke is being pursued by Hyoma, younger brother of Bunnojo, the man Ryunosuke had slain after raping his wife, and it seems that their final showdown is near. In addition, Ryunosuke meets another woman who looks like Hama, the evil woman who started him on the path to Hell. After seemingly being able to settle down to a peaceful existence, he helps a young man threatened by a corrupt lord. Ryunosuke's skill impresses that lord so much he is hired as an assassin and is asked who has become governor of the area. Meanwhile his thirst for blood has returned and he takes lives the way an ordinary person might collect coins. Can he be stopped and is Hyoma still willing to sacrifice his own life to gain revenge?