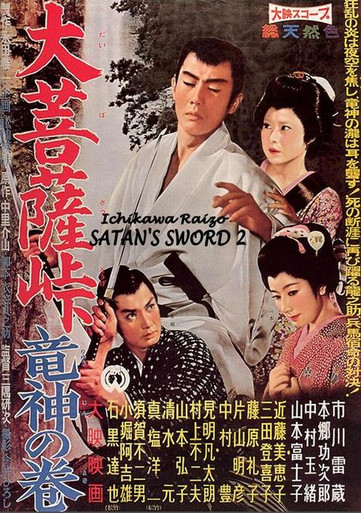 Part 2 of the dynamic trilogy from world renowned filmmaker Misumi Kenji telling the story of Tsukue Ryunosuke and the violent path he cut through Japan in the 1860s while the nation was in a state of turmoil  Brilliantly filmed and featuring one of Raizo's greatest performances this is a true classic.

After leaving the pro-shogunate Shinchogumi, Ryunosuke has joined up with the Tenchu group who are trying to topple the shogunate.  As the battles turn against the loyalist group they are taking shelter in the mountains while the shogun's army seeks to wipe out the remnants.  Ryunosuke differs from the other members of this group as he has no political belief, just a desire for blood!

Later on Ryunosuke meets a woman who looks just like Hama, and together they try to avoid the vengeance seeking younger brother, Utsuki Hyoma, who had joined up with the Shinsengumi. Many historical figures are in these films, and it has been documented that Tsukue Ryunosuke’s character was based on a real life person.

One of the true classics of Japanese cinema, this is a pivotal part of the story!