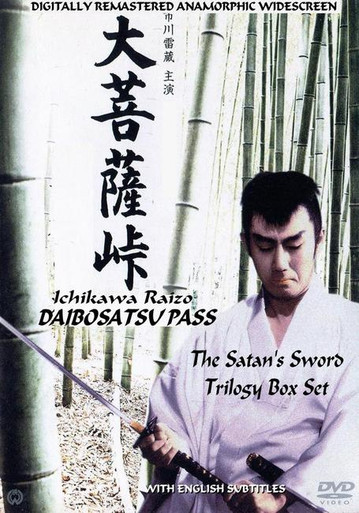 Japan's greatest novel comes to life in this masterpiece from famed filmmaker Misumi Kenji. Tsukue Ryunosuke is a powerful swordsman who has developed an evil style called ”Otonashi no Kamae" (Silent Stance) where he appears to be vulnerable in order to draw his opponents out before cruelly cutting them down. Leaving a trail of bloody corpses wherever he goes, Ryunosuke is a complex character with an evil streak and a desire to kill.  Along with Raizo giving one of his finest performances as the evil swordsman,  Nakamura Tamao in the triple role of Ohama, Otoyo, and Ogin brings her acting to an unsurpassed level.  And Hongo Kojiro is perfectly cast as the vengeance seeking Utsugi Hyoma, chasing Ryunosuke the length and breadth of the nation looking for a showdown.

Based on the novel "The Great Bodhisattva Pass" (the source for "Sword of Doom"), this version of the classic story sticks much closer to the original novel as written by Nakazato Kaizan. This gripping story ranges from one end of Japan to the other as a complex series of events keeps putting off the final showdown until the very last minute. An evil sword, an evil soul. Can the "Silent Stance" be defeated? This is the full trilogy telling the entire incredible  story  as  never  before!