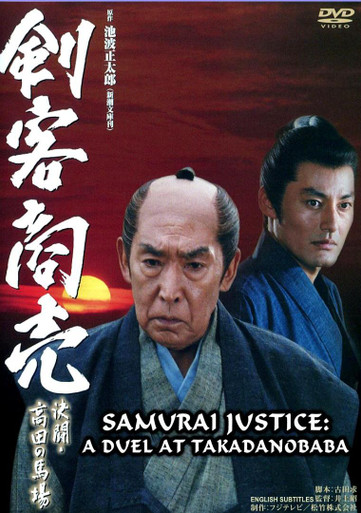 In this brilliant tale from the pen of Ikenami Shotaro, Edo is rocked by the news that a duel to the death is to be held at Takadanobaba, the famed site of a bloody revenge fought by Nakayama Yasubei, who late married into the Ako clan where he was one of the 47 ronin who took vengeance against the vile Lord Kira. This hallowed spot is to host a match between two of the finest swordsmen in Edo. Each is backed by a high ranking direct vassal of the shogun, who had bet their family heirlooms on the outcome. The loser was to commit seppuku and have his clan disbanded. Meanwhile a band of brigands are placing their bets on the fencer who had earlier killed their leader. Can retired master swordsman Akiyama Kohei keep this from becoming a major disaster?