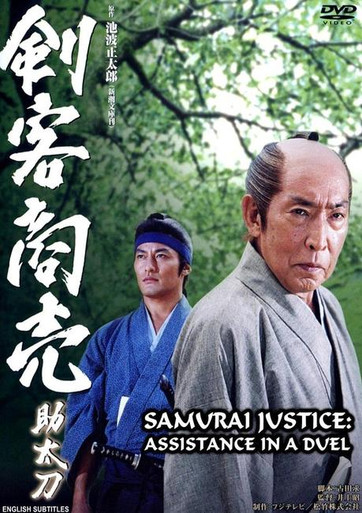 Full length made for television movie special from the long running series written by the great Ikenami Shotaro.  Brilliant storytelling with great action!
Fujita Makoto is best known for his role as leader of the Hissatsu (Professional Assassins), also written by Ikenami Shotaro, and Yamaguchi Makiya who plays the dojo sensei is best known for his role as the ronin who faced the Blind Swordsman in  Matsudaira Ken's stage play of Zato Ichi.

When a young boy seeks help in finding the man who murdered his father, Akiyama Daijiro is called upon to assist.  As they search out the villain responsible for the brutal slaying they uncover a plot by one of the clan officials that could change the course of history which leads to a thrilling conclusion!  From the pan of Ikenami Shotaro, author of the stories that became such films as Bandit Vs. Samurai, Hunter in the Dark (both by Gosha Hideo), and Misumi Kenji's Last Samurai.