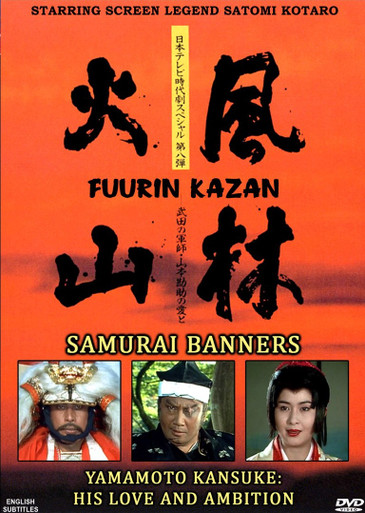 This samurai drama is the life story of Yamamoto Kansuke, a lonely genius of military strategy during the 'Age of Warring Clans' in the 16th century. Kansuke works under Takeda Shingen and pursues his dream of unifying the whole country through aiding the warlord of Kai. At the same time, Kansuke supports Shingen's concubine Yu with his selfless affection for the woman who hates, but eventually loves, the warlord who killed her father and family. With the aid of Kansuke's strategies, Shingen expands his power northward, where he is destined to fight with Uesugi Kenshin, the warlord of Echigo. Shingen's war banner contained the famous phrase "Fuu-Rin-Ka-Zan", taken from Sun Tzu's 'The Art of War'. This phrase refers to the idea of being "Swift as the Wind, Silent as a Forest, Fierce as Fire and Immovable as a Mountain". The phrase demonstrates both Shingen's policies and warfare strategy. The drama portrays how those who fought for their dreams faced their destinies in that turbulent age. A must see for any fan of samurai warlord history!